A flat yield curve is thought to be an indicator of an economic transition from a healthy economy to a recessionary economy. A flat yield curve shows there is little difference between short-term and long-term interest rates on bonds of the same quality.

Historically, a flattening yield curve follows a series of short-term interest rate increases by the government’s Central Bank. These interest rate increases represent the Central Bank’s efforts to control the positive inflation rate by slowing economic activity. The resulting increase in short-term rates is accompanied by a decline in the longer-term bond interest rates. The long-term bond interest rates decline due to a combination of reduced future expectations for the rate of inflation and economic growth.  As these expectations change, investors will alter their investment decisions, preferring to own short-term bond maturities, as there is no longer any compensation for investing in longer dated maturities.

A flat yield curve is viewed as a transitory pattern where as the economy moves from strong to weak growth, the yield curve moves from normal to inverted. 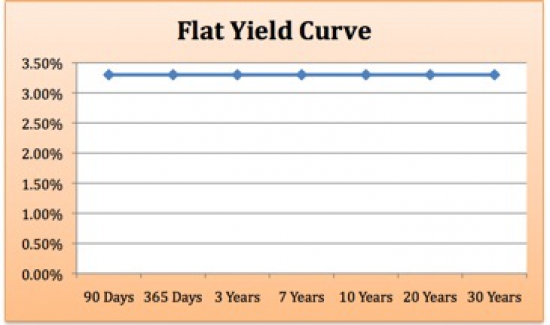